So we had finally organised our big adventure sailing from Panama to Columbia with Columbia Panama Sailing. We met Captain Gisbert "Gizzy" Kroczeck and he told us lots of stories of his trip on the spacious 50 foot long aluminum catamaran "Santana." We had heard so many stories about people getting bad boats so we did our research and found a boat that was not only big, comfortable and safe but Gizzy also spoke perfect English and promised us an amazing adventure. Colombiapanamasailing.com 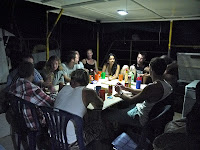 On the boat there was 16 of us... quite a few but i think it added to the fun. Our traveling companions were the 3 Australians we had met at the hostel Anthea, Tim and Brendon and one of their friends Leanne. Two English girls KJ & Alex, A Canadian Pria, an Austrian Petra (she was a bit of an oddball), an Argentinian, two Irish guys Allan & Garth, and a Scottish girl Victoria and finally two Germans our captain Gizzy and another guy Sven. Over the next 5 days we got to know each other well over some amazing food, beautiful scenery and a bit of alcohol it was a fairly good bonding experience for all. 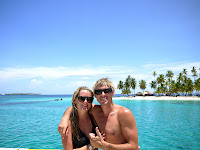 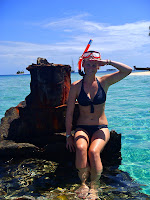 We sailed along the coastline of Panama, finally reaching the San Blas Islands which are possibly the most picturesque things i have ever seen. Hundreds of tiny desert islands, surrounded by amazing coral reef, complete with white sandy beaches, palm trees and crystal clear water. We spent 3 days there, snorkeling and sunbathing. We visited 3 different groups of Islands: Ninoup and Waisaladup in the Lemon Cays - where there was an amazing ship wreck to snorkel. Holades Cays and the Cangombia Cays.

The tropical paradise settings proved to be a perfect place for relaxing and chilling out. The most stressful thought any of us had seemed to be ¨will we run out of beer? 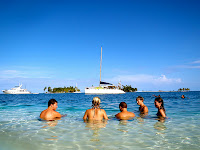 But that was solved when a small canoe-like boat with an outboard rocked up with some Kunese entrepreneurs and took our orders... We even managed to get fresh crab and crayfish one night, although they were extremely undersized they were still AMAZING. (The ¨Kunese¨ or "Kuna" people are the indigenous population in that region...and since 1910 or so, have been able to run the islands autonomously, without any real interference from the government.) 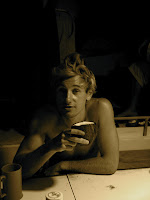 The boys also showed off their mad hunting and gathering skills one night when we had run out of mixer and they decided to buy so coconuts from the locals and crack them open. It took Jordan, Tim and Brendon about 2 hours to open 10 coconuts at one of the local beaches and it was so funny to watch. They were not too great at it and lost the milk out of some of them, but we were VERY thankful when they can on-board and we got to have some delicious traditional Rum and Coconut drinks! Jordan and Garth got a bit carried away that night and ended up drinking into the wee hours of the morning but overall we had a very entertaining night. 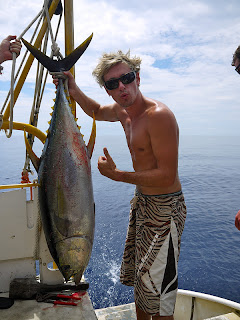 Finally, it was time to leave the Islands and begin our 40 hour journey across the Darién Gap. About 6 hours into our journey we were all sitting around eating yet another amazing meal organised by Gizzy, when we heard the fishing line pulling. Fish were jumping everywhere in the water and as Gizzy approached the line he swore under his breath! We new it was a good sign... 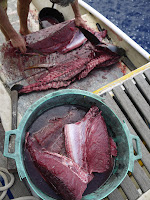 After about 5 minutes of Jordan, Tim, Brendan and Gizzy pulling in the line a 30kg Yellow Fin Tuna emerged, and god it was beautiful. The rest of that day was spent admiring the large fish, and cutting up the massive steaks in the smoldering sun. That night we got to enjoy our catch and o have to say it was one of the freshest dinners i have every had! WHAT AN AWESOME EXPERIENCE. After dinner we were all given a time for that night to keep look out for other boats. Unfortunately Jordan and i picked 3-4 YUCK! But when it rolled around it actually went very quick and we enjoyed the adventure. 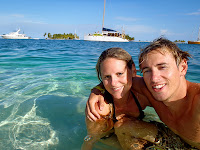 After another 20 or so hours it was time for us to leave "Santana" although we were sad i have to say after 40 hours of constantly rocking on a boat it was nice to step foot on dry land, and even better then that we were in COLUMBIA! Overall it was one of the best adventures i have done and i would highly recommend it to everyone, just make sure you have a good captain, a spacious safe boat and a fun crew :)